Grindal Shoals is the site of a Colonial ghost town built near a shallow ford on the Pacolet River in what is now Union and Cherokee Counties. 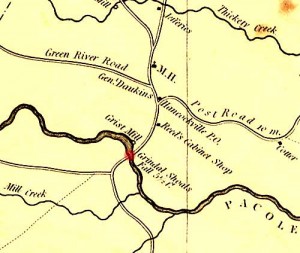 The town existed here because a slab of granite, virtually impervious to the tireless flow of the Pacolet River, allowed horse and foot traffic.

The Cherokee and Catabwa used the crossing for centuries before the arrival of European settlers.   Early Colonial settlers in the backcountry quickly built roads to align with places like this, creating centers of trade and communities.  Due to its useful location, Grindal Shoals grew into a sizable settlement and became an important crossing during the American Revolution. The site is now completely abandoned.

The first European settlers on the Pacolet River settled in the vicinity of Grindal Shoals. The ford gets its name from John Grindal, the first European settler to live here. Not much is known about him. He settled at the shoals around 1755 and was the first of an eventual flood of settlers to come to the area. Some time after this, the noted Patriot, Colonel Elijah Clark, led a group from Virginia to the vicinity. They settled and built their homes near Grindal Shoals along both sides of the Pacolet River. They soon spread up the Broad River and Thicketty Creek.

Elijah Clark was a noted hero during the Revolutionary War. However, by the time of the War he had moved from Grindal Shoals to settle on the Georgia frontier. During the war, Morgan’s American army was camped here before they began to retreat from Tarleton prior to the Battle of Cowpens. A considerable settlement continued here after the War.

In addition to more than a dozen residences, there were once grist mills, taverns, stores, lawyers and even a small textile factory here. One of the only visible ruins is the chimney and foundations of Christie’s Tavern. 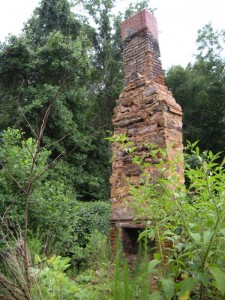 Made famous in the 1835 book Horse-shoe Robinson by J.P. Kennedy, Christie’s was operated by a man named Coleman and was a famous stopping point at Grindal Shoals.

For a variety of reasons, this settlement did not prosper, and by 1885 most traces if it had vanished. There are many people living in the Pacolet area today whose ancestors came and settled at Grindal Shoals long ago. Some of these names are Bailey, Coleman, Fowler, Hodge, Littlejohn, James, Nuckolls, Goudelock and Wood. 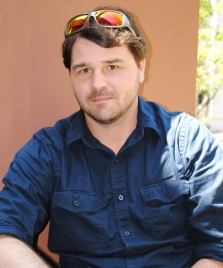